In 1946, when the Guide Dog Foundation for the Blind was founded, its mission was simple: to provide guide dogs and training – free of charge – to people who were blind or visually impaired. 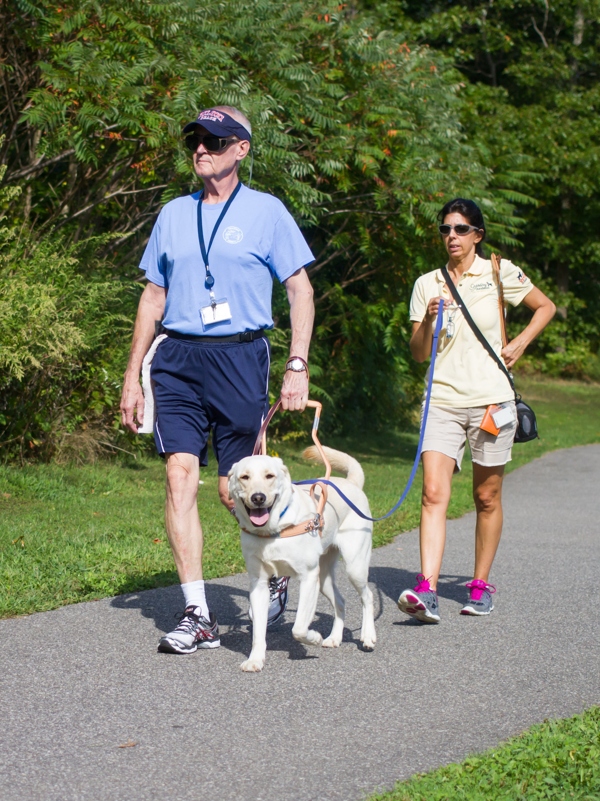 For 75 years, the Guide Dog Foundation has trained and placed guide dogs and service dogs to provide increased independence and enhanced mobility to people who are blind, have low vision, or have other disabilities.  Once the decision is made to get a guide dog, applicants become part of the Foundations' open and welcoming community and are supported with an uncompromising commitment to excellence, from highly empathetic and certified trainers, to a meticulously constructed curriculum.

The Guide Dog Foundation pairs each student with the dog that’s right for them – and the power of their bond makes ordinary moments extraordinary.  Crossing the street independently becomes a moment of liberation.  Traveling alone becomes a welcome adventure.  Embracing new experiences becomes an everyday occurrence.

"Hello friends!  The name’s Vito and I’m beyond pumped to share my journey to becoming a confident future guide dog with you all. Over the next 15 months I’ll be learning tons of cool new things that’ll help me be a successful guide dog to someone blind or visually impaired. My go to treat is for sure peanut butter and on a hot day I can’t resist a puppy ice cream! You’ll typically find me cruising down the boardwalk, grabbing grub at Maureen’s kitchen or kicking back Down Port". Taylor Foster is born and raised on Long Island, New York. She attended Stony Brook University on Long Island where she raised two guide dogs for the Guide Dog Foundation.


Taylor began volunteering with the Guide Dog Foundation when she turned 18 and has since raised two guide dogs. She is currently raising her third, Vito. Vito is a Labrador/Golden cross that Taylor is ecstatic to raise and train. "He is such a sweet, handsome and brilliant boy who truly loves learning," says Taylor.  "I'm so happy to not only be apart of Vito’s journey to becoming a well mannered guide dog, but to also be able share it with the world is very exciting." Taylor wants to show all the love, fun and dedication that goes into raising a guide dog. Be sure to follow along! We got to ask The Guide Dog Foundation some questions about Vito and we are so excited to share their answers! 1. How old is Vito and what is a brief background/story about him? Vito is a year and 2-month-old, Golden/Labrador mix in training to become a guide dog for someone who is blind or visually impaired. He is currently being featured weekly on The Dodo to follow the puppy raising and training journey of a guide dog in celebration of the Guide Dog Foundation’s 75th Anniversary. His name is unique as it’s named after the Foundation’s first guide dog graduate, Vito Vero.

2. What type of work does Vito do and what makes him special? Vito is in training to be a guide dog for someone who is blind or visually impaired. Guide Dog Foundation dogs learn how to lead a person in a straight line, find and follow a clear path, maneuver around obstacles (both on the ground and overhead), and stop at changes in elevation, such as curbs and stairs.  They are also trained to be extremely well behaved when in public places. 3. Can you explain Vito's opportunity of being featured in 'the Dodo'? He is being featured on The Dodo weekly since he was 8 weeks of age to showcase what goes into puppy raising and eventually the formal training guide dog’s go through before and after they are placed with an individual who is blind or visually impaired. 4. Does Vito have any health issues? Our dogs are bred for personality but also being able to medically trace their health. He does not have any health issues (otherwise he wouldn’t be in our program), however the Big Barker beds provide a safe, comfortable, snuggly spot for him to rest after a long day of training. The bed will also be used as a training object to train the cue “place” where we train our dogs to target a specific spot where a client can tell their guide dog to go to if folks come to the door, opening an oven, etc. A safe space where the client knows they are out of the day of any potential danger/being stepped on. 5. What are some of Vito's favorite things to do/eat/etc? Vito loves to play outside with his sister Georgia in Taylor’s home. His favorite treat would either be a peanut butter stuffed toy or a good bone. He loves training and going to puppy classes with Taylor and the other dogs in training with the Foundation. 6. If Vito could tell the world one thing, what do you believe it would be? Vito would say to incorporate giving back to your community and try to add unique opportunities into your life that help others. He looks forward to guiding and individual with low vision and hopes others join him in his mission to assist individuals with disabilities.


A huge thank you to Vito and the Guide Dog Foundation for everything they are doing to make life more accessible for those with disabilities. We are so proud of this mission and proud of Vito!

You May Also Like:
Big Dog Mom's Review of the Backseat Barker SUV Bed
16 Questions | Pack of Potatoes